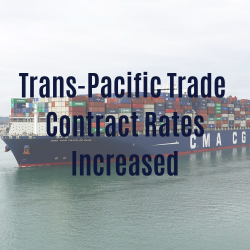 Freight rates for annual ocean carrier contracts increased 20% in the trans-Pacific trade in recent negotiations conducted by the largest US Importers. They are signing the contracts at about $2250 and $1250 for the US East Coast and West Coast per FEU respectively. Mid Sized importers and cargo owners are expected to sign contracts for approximately 1400 per FEU to USWC points.

We are expecting the Bunker Surcharges to increase again later this year. According to the International Maritime Organization’s 2020 mandate carries will be required to use the low sulfur fuel oil. So the carries and BCOs (beneficial cargo owners) are expecting higher bunker rates in the fourth quarter. Carriers intend to implement a floating bunker adjustment factor (BAF) by the fourth quarter.